International Point of Sale
The lowest prices on every POS hardware product. If you're looking for a barcode scanner, receipt printer, pole display, cash drawer, card reader, or anything else, give us a call or order online. Also available for review, touch screen monitors, pos terminals, barcode and label printers, thermal receipt paper and standard receipt paper, and ink cartridges. Call (866) 468-5767 for prices.

Posiflex Jiva
The Jiva is a durable computer system that is designed from the ground up for POS stations and restaurants. It is a Windows computer with a built-in touchscreen that can withstand the rigors of constant use in the work environment...read more

POS Solution
Call us for our POS and inventory solutions for your iPod, iPhone, iPad, Blackberry and Android Smartphone!

Mr. Wine and Liquor located in Batavia, New York has the LARGEST selections of discounted wine and liquor inventory in the area. The owner, Kevin, started his business in April of 2008 and his vision was to offer customers the best quality wine and liquor at a price they could afford. Kevin handed the POS research to his partner Byron. Byron who has a background in IT and computer programming began researching POS systems and he wanted one that was compatible to Kevin's vision for Mr. Wine and Liquor - exceptional quality at an affordable price.

Bryon initially came across POS systems that were too costly and complicated to use. When Byron found our website and downloaded the CRE demo he was pleasantly surprised. "Our initial research led us to some systems that were way too costly. Some of these systems were over $10,000. I did find this system on the web and after downloading the demo I was impressed with the functionality and the price."

After Kevin purchased his POS system from International Point of Sale, the small investment he made brought in huge returns in sales and customer satisfaction. The CRE software has provided him with the ability to quickly manage a fast flow of customers while accurately keeping track of inventory from stock after each sale.

As a result of their growing number of customers, Byron also wanted a software that could manage a customer database that kept track of customer history to provide rewards for his VIP membership. CRE software features did just that! Some of Byron's and Kevin's favorite features of CRE were the inventory tracking, customer history, history of sales, barcode scanner and daily sales reports. 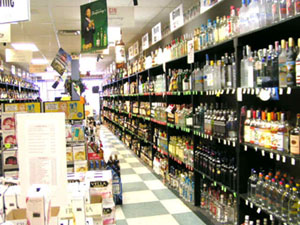 Notably, the scanner provided the business with accuracy and speed because, "the scanner stops a person from transposing the numbers when doing it manually." Kevin can worry less about small details, such as accurately punching in sales items and focus more on providing his customers with quality service.

The POS system and CRE software has boosted Mr. Wine & Liquor's sales and the business has made a name for itself in the Batavia area as the premier wine and spirits shop to go to for customer satisfaction. What a difference a POS system can make!

If you are interested in a POS system like the one at Mr.Wine and Liquor or if you'd like a system custom tailored to your needs call (866) 468-5767 for a price quote.

Return to the POS library.